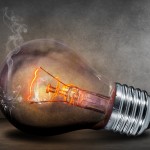 Did you know that light bulbs have lifespans? It seems, perhaps because we aren’t really paying attention, that bulbs burn out on a whim. The bathroom light worked an hour ago when you took a shower. You go in again and it pops and fizzles as soon as you flip the switch. Even though it may seem like it, your light bulb didn’t simply decide to burn out. If you read the packaging carefully, or do a bit of research if the lifespan isn’t listed on the box, you can calculate how long your bulb should last assuming it was made properly.

In the lighting industry, a bulb’s life is rated as ARL or Average Rated Life. The ARL is the length of time it takes for half of the bulbs in a test batch to burn out or fail. It is also known as the half-life. For example, if there are 50 bulbs in a test batch and they earn an ARL of 1,000 hours, that means that 25 bulbs failed by the 500 hour mark. Some may have failed sooner, and some may have failed later. But half were not working when 500 hours passed.

Turning a light on and off frequently reduces its ARL. Fluorescents, Compact Fluorescents and HID bulbs are impacted more by the on-off cycle than incandescents, halogens and LEDs. What that means to you is that a bulb that is turned on and off once each day will last longer than those that are turned on and off multiple times a day.

When the life of bulbs is tested, the tests are conducted under typical or average conditions. This means that if you use a bulb in an area that is hotter than normal, colder than normal or experiences vibration on a regular basis, the ARL typically will not be reached. The following is the ARL for various bulbs:

If you would like more information about how you can transform your life through light or about LEDs in general, sit back, grab a cup of coffee and read through our site. We have tips and tricks for everyone from homeowners to business owners and in between. We know that you will find something that catches your eye.